The Blue Caviar strain is a euphoric and energizing sativa that has grown in popularity among marijuana smokers using it for both recreational and medical purposes. It took home two Medicinal Marijuana Cups in 2011, winning second-place honors in the ‘Best Sativa’ category.

The Blue Caviar cannabis strain became well-known in 2011, when it took home two second-place trophies at the High Times Medical Marijuana Cannabis Cups in Denver and San Francisco for its high THC concentration.

Blue Caviar’s two Cannabis Cup high-place victories and Grower of the Year accolades bolstered its reputation as a grower. Since then, Blue Caviar’s popularity among both novice and seasoned marijuana users has grown.

What Is the Blue Caviar Strain? 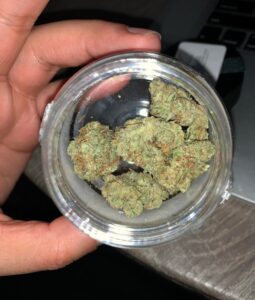 Cannabis varieties are often categorized by the amount of THC (delta-8-tetrahydrocannabinol), which is responsible for their psychotropic effects. The Blue Caviar strain, which has a 90:10 sativa to indica ratio, is a sativa plant. It’s easy to see why the Blue Caviar strain is sometimes known as Diesel Dream when you look at its lineage. To produce the Blue Caviar cross, legendary Blue Dream was crossed with multi-award-winning NYC Diesel. It’s usually known as the Blue Caviar variety, although it’s also referred to as NYC Diesel.’

It’s no surprise that its effects are uplifting and invigorating, given that it’s composed of 90 percent sativa strains.

The Blue Caviar is a 90 percent sativa strain with uplifting and energizing effects, as this fits its name. Most people experience pressure around the eyes and temples after taking this drug. The following high is described as euphoric and boosting, as well as energizing. Some users have claimed increased tactile sensitivity.

Blue Caviar is a great wake-and-bake strain that performs best during the day. Although Blue Caviar has mainly sativa effects, they aren’t overwhelming. When it comes to Blue Caviar, most consumers report feeling uplifted and revitalized. Its mood-boosting qualities make it a fantastic social smoke to share with friends.

Blue Caviar contains a THC level of around 15-20 percent, which is well below the average range for most people. However, first-time users may wish to start with a low dose and see how they feel about it.

Blue Caviar’s fragrance is sweet, delicious, and unique. These delectably sweet scents are complemented by a rough, earthy scent that distinguishes Blue Caviar from its parent strain. The nuggets within Blue Caviar’s cured, dried buds have a faint diesel odor comparable to that of NYC Diesel, the parent strain.

The Blue Caviar plant reaches a height of 3 to 6 feet and produces medium to large spade-shaped blooms. It’s a sativa variety with fluffy, light-green foliage. A Blue Caviar plant’s buds may be either deep red or pale violet in color.

The Blue Caviar plant has a white, frosted look due to its thick covering of sticky white trichomes. The vibrant orange pistils that extend throughout the plant’s leaves provide brightness to the image. The good news is that establishing a Blue Caviar plant is simple. Even novice cannabis growers may have little difficulty cultivating this crop. The resistance of an Blue Caviar plant to common molds and mildew, as well as the medical benefits attributed to it, are unquestionable.

Both inside and outside may be used to cultivate the Blue Caviar plant. In contrast, these plants flourish in a warm, dry, and bright environment. The ideal temperature range is between 72 and 80 degrees Fahrenheit.

It is preferable to top a Blue Caviar plant in the early vegetative phase, as it may grow to be very tall. To keep your Blue Caviar plants at their height and shape, you’ll need to prune them on a regular basis.

The Blue Caviar plant’s eight- to nine-week blooming period is typical. Indoor growers will generally produce about 12 ounces per square meter, which isn’t much. Mid-October should be the harvest date for this plant, with a yield of around 15 ounces per plant.

Growers who have previously produced Blue Caviar claim that curing the buds is necessary to get the best flavor and fragrance. Hanging the buds upside down or on a drying rack for 7-10 days may start the drying procedure.

Buds that are still wet will mold if not cured. Buds must be dried completely before being cured to minimize mold growth. For preservation, store the buds in an airtight container, such as a wide-mouthed mason jar, after they have been completely dry. When ready to store the jars, carefully close them. The buds will require five to ten minutes of breathing room three times a day during the first week while the lid is opened. Any moisture within the jars will evaporate, allowing them to breathe easily.

After two weeks, you may repeat the treatment just once or twice more to ensure that any mold is entirely gone. Blue Caviar buds should be completely dried after two or three weeks. You have the option of leaving these buds to cure for another four to six weeks if you have patience.

The most potent Blue Caviar sample ever discovered had a THC concentration of 20 percent. The typical THC amount in Blue Caviar is believed to be between 15 and 20%.

So, what can the Blue Caviar strain do for medical cannabis users? Its mood-altering qualities may assist those who are sad or nervous for a short time.

Blue Caviar is a delicious, beautiful-tasting dietary supplement that has become well-known among both inexperienced and expert users. For those who have had a long or stressful day, Blue Caviar’s capacity to relax them out might come in useful. Perhaps stressed individuals looking for a medical cannabis strain that helps relieve stress could benefit from Blue Caviar.

Blue Caviar is a cannabis strain that must be cultivated only during the night. This strain’s increased vitality may help with the treatment of tiredness caused by chronic tiredness. Customers claim that Blue Caviar alleviates mild pain (such as headaches and muscular pains) when smoked.

The Blue Caviar strain is especially popular among the elderly. It’s described as relaxing without causing drowsiness, making it an ideal choice for insomniacs who use cannabis.

Possible Side Effects of the Blue Caviar Strain

The Blue Caviar strain is recognized to cause cottonmouth and dry eyes, two of the most prevalent negative effects. After using this strain, some users have experienced dizziness, nervousness, and paranoia.

You’re more likely to become sick if you’re a first-time smoker or a heavy user. However, experienced cannabis users who use precautions are unlikely to experience any apparent negative effects from this strain.

Blue Caviar is a popular energizing and uplifting sativa available to both recreational and medical marijuana consumers. Many people enjoy the power of Blue Caviar since it has a wake-and-bake quality.

Because to its strong effects, the Blue Caviar strain is frequently known as a great “wake and bake” type of cannabis. These unpleasant side effects are uncommon, however while this plant can make some individuals feel dizzy, anxious, and paranoid. If you eat it in moderation, you’ll be safe from any of these negative symptoms.