The Gorilla Glue strain review is one of the most-used search phrases among cannabis users looking for information on new and powerful marijuana strains. The Gorilla Glue strain is one of the most famous and powerful marijuana strains available. It’s no surprise that consumers, growers, and dispensaries adore this indica-dominant strain, which is known for its efficacy.

We’ll provide you with all the information you need to know about smoking Gorilla Glue strain, one of the world’s most potent cannabis strains, in our comprehensive tutorial. We’ll teach you everything there is to know about Gorilla Glue’s history, aroma, and effects so that you can enjoy it safely and successfully.

What Strain Is Gorilla Glue?

Gorilla Glue is a powerful indica-dominant cannabis strain developed by GG Strains breeders. You may feel a rush of euphoria and relaxation after taking a big dose, making you incredibly glued to the sofa. Gorilla Glue buds are chunky and coated with resin-rich trichomes.

Gorilla Glue is a cannabis strain with THC levels of around 20% and indica qualities. Users may quickly identify Gorilla Glues with THC concentrations ranging from 18 to 30 percent. Gorilla Glue’s CBD content is typically less than one percent.

Sour Dubb is a hybrid strain that’s been called Sour Dubble, appearing to be a cross between an East Coast Sour Diesel and a Sour Bubble. The heavy bud structure and high trichome counts of Sour Dubb, as well as its sweet and sour fragrance, are passed down.

The Chemdog A, also known as Chemdog B or Chem’s Sister, is a sativa-dominant prototype of the legendary Chemdawg strain. In the mid-nineties, Chemdog Sis was created and has a skunky and diesel odor with cerebral effects comparable to those produced by GG strains. 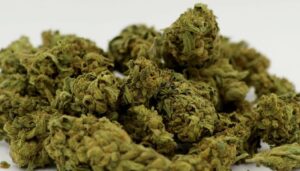 The taste is one-of-a-kind and fascinating. #4 GG is recognized for having an earthy, somewhat woody, pine tree, and sour flavor with undertones of coffee and chocolate. As a result of the high THC level, it may have a chemical edge. Overall, people appreciate the flavor.

The scent is pungent and like mocha, with undertones of coffee and chocolate. If you want to be inconspicuous when testing it, keep in mind that the plant’s as well as the burnt flower’s aroma are comparable.

What Are Its Effects?

Because GG is so potent, even seasoned smokers will receive a powerful hit after just one inhalation. Even if you’re used to it, we recommend taking it gradually.

GG is called “Gorilla Glue” for good reason: it can “glue” you to your couch. Its Indica/Sativa ratio provides the ideal combination of uplifting euphoria and body-melting, soothing relaxation. Its effects are usually felt throughout the body, resulting in an overpowering sense of immersion that fades into pure serenity as the initial high wears off.

What’s It Used For?

Hash, which is also known as the “original glue,” has been used for hundreds of years. It’s a common remedy in the neighborhood and is also utilized to unwind and have fun. The Original Glue is well-known around the neighborhood for its medical uses. People use it to cure a variety of ailments, particularly GG because to its high THC content. It’s not advised for people with more serious illnesses since its cannabidiol (CBD) concentration isn’t high enough to fight severe health conditions.

This strain is one of the greatest for reducing stress and anxiety. It can also help with post-traumatic stress disorder since users frequently report feeling less anxious and better. However, if you want to relieve these symptoms, you must take care and consume it in small amounts because taking too much may cause the opposite effect: anxiety and paranoia. If you’re using it to combat sleeplessness and need a good night’s sleep, slightly higher dosages are recommended. Don’t go crazy, though.

What Are the Side Effects?

Breeder Select created the Gorilla Glue, a potent marijuana variety that has been bred. It’s better if inexperienced users wait until they’ve built up a tolerance since they’re more likely to experience harsher side effects.

The most common unfavorable effects of smoking GG are dry mouth and dry eyes. To alleviate the pain, make sure you’re hydrated before getting high and have a bottle of water on hand at all times. Eye drops can also help, but they aren’t required.

Fear, worry, and paranoia are all typical indicators. This might happen if they’ve had too much, if it’s their first time, or if the strain is somehow incompatible with them. Every person is different, so what works for one may not work for another; as a result, the most important thing to do in this situation is to keep cool and breathe slowly while remembering that it will pass.