Start With The Right Seeds

It’s the presence of anthocyanin that makes red weed feasible, as we learned from our discussion about flavonoids and anthocyanin. If a strain’s genetics include carotenoid instead of anthocyanin, the color will be more yellow in nature.

It’s all random – a flip of the coin. Nothing you can do will alter that. It’s like trying to produce kiwi from a tomato plant that has been planted. It just won’t work. So, to grow red weed, you must first sow seeds with an inherent incline toward red (such as anthocyanin-rich).

When temperatures begin to drop in the fall, plants change colors. So mimic these autumn temperatures and allow the anthocyanin time to do its job.

Reduce the temperature below 50 degrees Fahrenheit during the night cycle to help break down chlorophyll and make the anthocyanin more active during the flowering stage. These lower temperatures may create red-colored buds a few weeks before harvest if done on a regular basis. 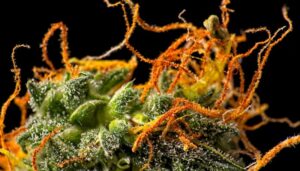 Marijuana’s anthocyanins, among other things, function as a sort of sunscreen. The plant protect itself from the damaging UV rays that the sun delivers to it on a daily basis with the help of anthocyanins. You may “promote” cannabis growth by exposing it to a UV light source.

Play With The pH

Cannabis thrives in a soil pH of 5.5 to 6.5, which is known as the optimum range for cannabis growth. However, you may alter the pH just slightly if you want your own red marijuana.

Some plants (particularly those that produce purple buds or leaves) have colorful stems as a natural occurrence. These stems are typically redder than they appear and resemble more purple than blazing crimson. The color is seen in all parts of the plant, not simply in areas that are exposed to light. There’s nothing to be concerned about in this scenario, so you may just take pleasure in the hue.

Purple or reddish stems and leaves can be caused by hot days and/or chilly nights. If the discoloration appears the day after a chilly night, it’s possible that the rapid change in temperature induced the colorful stems. Temperatures changes commonly cause purple stems, although occasionally they may turn reddish.

Is your pH too high or too low? If you’ve ruled out all of the above causes and still have red stems, there’s a good chance your plant has a pH-based nutrient deprivation (or the start of one). Magnesium and phosphorus deficiencies are two types of nutrients that can cause red stems. These shortages are usually induced by incorrect pH if you’ve been feeding your plants.

A nutrient deficiency is more probable if the majority of your stems are red (not purple) all over the plant, and the color does not seem to be influenced by light exposure. Brown edges, curling leaves, scorched tips, yellowing, and other symptoms of deficiencies are also possible. Unfortunately, nutrient disorders caused by incorrect pH are difficult to correct.

Phytocoenosis, overfertilization, or underfertilization can all induce red stems. Red stems are a sign of a nutrient deficiency caused by high or low pH levels. This leaf has several issues to overcome, including red stems.

Water testing the pH may not appear to be a glamorous process, but I consider it to be similar to correcting pH as a supplement that helps plants grow better. Plants thrive when they have the proper pH. Even if you’re using “PH Perfect” nutrients or “Super soil,” you could still run into issues if the pH goes out of whack. If your plants are having issues, don’t miss this step!

If you look at your plant and see that it’s pale all over, as well as the red stems, it’s possible that it just requires more nutrients in general. This is particularly prevalent if a plant has been kept in the same container for an extended period without receiving necessary nutrients. If you’re growing in an inert soil-less medium like coco, you might be providing insufficient quantities of nutrients. If your plant is rootbound in a hard-sided container, it’s more likely that it’s because it’s out of nutrients than because it’s too big. This means you should transplant to new soil if you have a pot with a lid. If you’ve been feeding your plant with water, this isn’t something that will apply to you, so go on to the next step.

This plant’s overall pasty hue as well as the red stems suggest that it requires additional nutrients in general. This grower must provide higher levels of nutrients to the water since it is grown in coco coir (which does not naturally contain any).

Cannabis plants require a lot more nutrients than many home plants, therefore growers frequently add them while the plants are developing. However, there are certain types of cannabis cultivation that don’t need extra nutrients at all.

For example, you can cultivate a plant such as cannabis from seed to harvest in a big pot of richly amended, freshly composted (“alive”) soil that has been designed for such plants. This method works by mimicking natural processes and delivering nutrients via a process similar to nature. The composted dirt contains a colony of microorganisms that break down organic waste into nutrients, which your plant can absorb over the course of months. The water is added “just add water” technique.

Where can you purchase “just add water” soil? For a premade “Super Soil” concentrate, I recommend Nature’s Living Soil. They have been an excellent company that backs up their product and is happy to answer questions about how to utilize their concentrate for growing cannabis. It takes months for the organic sources of nutrients in the mix to break down as a result of adding it to normal earth or coco. If you follow instructions carefully, you shouldn’t need to replenish the water with nutrients throughout the seedling stage until harvest.

These plants were grown in nutrient-rich soil, but they finished consuming all of their nutrients before harvesting. The yellowing leaves and crimson stems are the result.

If your plants have been growing in the same container for a long time, all of the nutrients in the dirt may have been utilized (even if you started them off in richly amended super soil). Alternatively, red stems can be caused by low phosphorus and magnesium levels in the soil. If you think your plant is just lacking nutrients, the best approach to give it more is to supplement it with extra elements. Even if you’re growing organically, there are several natural sources of nutrients that can be used to supplement your crop until harvest. Because complete nutrition ensures the finest, biggest, and stickiest buds possible, use nutrients specifically designed for cannabis.