HomeUncategorizedBanana OG Weed Near Me

Banana OG Weed Near Me

Banana OG Weed Near Me

Banana OG is a strong strain that has the tendency to “creep” on its consumers. This strain will be enjoyed by those who prefer a smooth, gentle climb. Users, however, frequently experience an uplifting and euphoric state followed by a state of total relaxation once they have reached their peak in terms of high. When an experienced marijuana user encounters a strain with “OG” in its name, they know exactly what to anticipate; smooth, relaxing highs with an intricate mix of terpenes that generates a rich aroma and flavor profile filled with skunk, spice, and diesel. You can buy Banana OG using our weed near me.

Despite the fact that OG Kush is such a popular strain, some consumers desire a more varied flavor profile. Though OG Kush’s sour and unique tastes and effects are appealing, today’s consumers are frequently seeking for sweeter or fruitier tastes.

This is why Banana OG strains are ideal for the new generation of marijuana users. This strain combines aspects of both OG Kush and Banana Kush, resulting in a banana taste that is very apparent, yet with all the overpowering indica effects of its parents.

What is the Banana OG Cannabis Strain? 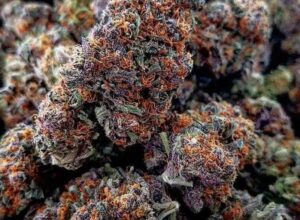 Banana OG Cannabis Seeds is an indica-dominant hybrid created through the crossing of OG Kush and Banana Kush. This implies that it is the result of two distant relatives in the Kush family being interbred to provide a strong combination of banana-tinged kush.

Banana OG’s primary distinction, in addition to its well-known flavor, is its THC concentration, which is completely out of this world. As a result of its extremely powerful effects of cannabis, Banana OG is an incredibly strong Indica with a high yield potential.

Banana OG is also known as “creeper” because it has a tendency to creep on you after your first dose. In contrast to other strong strains, in which the effects are apparent almost immediately, this strain might leave you feeling unaffected and believing that your bud is somehow defective.

This is why many users believe that they have acquired a magical tolerance to cannabis, only to discover later on that their marijuana was genuinely effective after all. Then you suddenly realize you’ve smoked far too much.

Even if you’ve only smoked a little, the final high will hit you very strongly, affecting both your mind and body simultaneously. Though it has an indica content of 60%, Banana OG’s hybrid qualities are clearly visible as you realize that the high is affecting seemingly every single part of your body.

Your thoughts will race, and you’ll feel an uplifting euphoria that resembles a pleasant sativa high. Your body, on the other hand, will suddenly collapse over—your muscles will tighten, your bones will become flaccid, and you’ll fall asleep on your couch. Also, without you even realizing it, more than an hour has passed.

As Banana OG’s high fades over time, it transforms into a variety of different emotions. You’ll be hit with the knockout, all-encompassing effect that makes everything feel like it’s crumbling around you at first, but after a while you’ll feel exceptionally calm both mentally and physically.

It’s like when you’ve been on the road for a long time and finally get to sit down. Your body will have a pleasant buzzing of satisfaction, similar to that of a cat who has just awakened from a nap, and you’ll be in the early stages of couch lock. You won’t just be looking at the walls; expect to be trapped in deep, intense thought processes while focused on your entire existence, perhaps even deciding to make major changes in it.

Banana OG will undoubtedly make you feel drowsy, leaving you little energy to do anything else. Many people use this strain to manage stressful situations in their life or treat a variety of medical issues. This is one of those strains that can be used for a lot of things depending on the potency of the dose taken.

The Banana OG, on the other hand, has a mild and complex flavor profile that many users seek out.

The main aroma that you will notice is banana, as might be expected from a strain called Banana OG. This fruit- and-spice scent is complemented by a citrusy quality that reminds me of citronella. An earthy spice emanates forward once you begin to break open the brittle buds, with traces of freshly mowed grass occasionally showing up.

This strain is recognizable by its distinctive aroma profile, which is very similar to that of OG Kush. It has a unique sour, nasal scent to its buds that are somehow both typical marijuana flavors and something completely new at the same time, despite being labeled Banana OG.

The first flavor sensation you’ll get after smoking this fruit strain is earthy, with a tangy tropical undertone. Consider the flavor of a Capri Sun or any other commercially available tropical-flavored beverage. There’s a sweetness to it that balances out the zestiness of the fruits, without being cloying.

The aroma is very unique, with a flavor that is strongly reminiscent of OG Kush or any other Kush-family strain. There are undertones of lemony citrus and the odd taste segment of spiced oak, which give this Indica Hybrid strain a somewhat likable taste profile similar to a really well-aged cask of whisky; the tastes are distinct yet they seem to blend together and form something entirely new.

Banana OG may have a flavor and smell that is truly unique, but it nevertheless manages to be a near replica of other marijuana strains. It has a typical pale green color with tight and dense bud development that is characteristic of indica strains.

The bud’s exterior contains some appealing, orange-tinged pistils that may give it a somewhat fuzzy look, but when compared to other marijuana strains in the world, this variety lacks any distinct or interesting color palettes.

The flowers of this species, however, are surprisingly lovely, with a rich amber color that resembles the setting sun on a clear day. However, you will never be able to see it for yourself unless you cultivate it yourself, so what do you need to know in order to produce Banana OG at home?

Banana OG seeds can be purchased online, although they are only available at a few select outlets, such as Breeders Apothecary Genetics. Banana OG is best cultivated in a warm and somewhat humid atmosphere with temperatures ranging from 70 to 80 degrees Fahrenheit. Because it is an indica-dominant hybrid, Banana OG is expected to develop tall and bushy, growing laterally rather than vertically.

This is only useful for the development of its cola, so urge it to do so as often as possible to increase the amount of bud available. Trim off the top of the plant and any foliage that seem to develop around and above existing development on a regular basis. When trimming your marijuana plants, keep in mind that you’re aiming to maximize each leaf’s exposure to sunlight while minimizing light loss by pruning it down.

Expect for the plant to begin flowering after approximately eight weeks, however if it has been inadequately nourished throughout its development period, it might take a little longer. How much THC can you anticipate from your modest yield when you’ve finally finished harvesting and drying your Banana OG?

Banana OG is not only an excellent strain for its flavor and effect, but it also serves as an example of a strain with extremely high THC levels that still tastes good and isn’t overwhelming to the senses.

Banana OG is a super-potent indica strain with a THC concentration of 25 to 30 percent, according to some samples. Many indica strains have a THC content of around 12.5 percent, but Banana OG can be anticipated to have a maximum THC content of 22% on average, with some specific samples reaching as high as 25%. This makes Banana OG one of the most potent strains accessible, capable of treating a wide range of medical issues.

Is it affordable? How about the CBD content of the product? Is it present in equal amounts and able to help cure a variety of ailments?

Banana OG, like other high-THC strains, has a relatively low CBD content. Banana OG is not a good strain to use if you want medicinal benefits from CBD content because no sample ever exceeded 1% CBD concentration.

Banana OG is primarily used as a medication because to its astronomically high THC concentration. When you consume marijuana with this level of THC, it activates the CB1 receptors in the body effectively.

Bananas OG is a wonderful strain to utilize when dealing with both physical and psychological problems since it inhibits the release of neurochemicals and brain functions that produce pain. This strain’s extremely euphoric effect, which leaves you in a state of total stupor, makes it excellent for coping with mental difficulties and sadness.

Banana OG’s calming effects are aided by the fact that it has the seemingly magical talent to completely erase any desire to perform anything physical. Though this strain won’t put you out or knock you out, its powerful sense of relaxation and overall sense of calmness are wonderful at putting you into a restful slumber.

Of course, there are a few risks with using marijuana for medicinal purposes.

Possible Side Effects of the Banana OG Cannabis Strain

The most apparent and potentially dangerous side effects are paranoid and anxiousness tendencies, owing to the strain’s high THC but low CBD content. It’s possible that this is due to its substantial THC whilst having a low CBD content, given that CBD has long been linked to reducing paranoia and negative outcomes from THC.

Even if you like to use cannabis as a quick pick-me-up or for everyday pain relief, there’s no denying that this powerful strain has some serious downsides. THC levels in this potent variety are high, which means that if you have anxiety or paranoia, it’s not the best choice. The higher mental acuity and a mix of both couch lock and vivid thought patterns would most likely put you in an anxious, overly suspicious state.

There are also the standard dry eyes and a dry mouth that any moderately powerful cannabis strain causes, so keep a glass of water on hand to assist with it. Finally, this strain is renowned for producing strong munchies, therefore be sure to have some kind of snack or easily consumed food available to help you satisfy the inevitable surge of hunger.

Banana OG is a kind of love letter to marijuana crossbreeding; by combining two distant relatives in the Kush family, one being an original and the other distilled from many others, you get a blend with both tastes and effects.

You’ll find that Banana OG Kush has the same characteristics of its parents, with a distinct banana flavor tinged with the usual OG Kush components. You may also enjoy a near-perfect storm of both indica and sativa effects, leaving you physically exhausted yet mentally active.

While some may find the split between mind and body to be perplexing, Banana OG’s considerably powerful effects make it one of the most effective and useful strains available, so keep an eye out for Banana OG the next time you go to your cannabis shop.

You may be lucky enough to see one of the greatest examples of cross-breeding between marijuana strains.