HomeUncategorizedIs Marijuana a Depressant or Stimulant?

Is marijuana a depressant or a stimulant? Its medicinal advantages have helped millions of people across the world relax and feel better. Marijuana, on the other hand, has variable effects depending on an individual’s sensitivity and the type of cannabis consumed.

Marijuana may be classified as a depressant or a stimulant in certain circumstances. In this post, we’ll explain what stimulants and depressants are and how marijuana might be utilized to treat them. We also go through the risks and drawbacks of marijuana use, as well as safe cannabis usage. Looking to try something new? Check out this.

Marijuana has been used for medicinal and recreational purposes for thousands of years. The dried and cured harvested flowers are usually taken in a wide range of ways, including smoking, eating, topical application, and sublingually.

Marijuana is a therapeutic substance that has relaxing and euphoric effects. Many states have legalized marijuana for medical use in certain situations, such as severe pain, cancer, epilepsy, anxiety, post-traumatic stress disorder (PTSD), glaucoma, and other maladies.

What Are the Effects of Marijuana?

Marijuana has a number of side effects, some more unpleasant than others. When utilized correctly, it has the ability to create euphoria and relaxation. Other mental and physical consequences include altered time perception, enhanced sense of touch, increased hunger, and good feelings.

In certain situations, marijuana may be classed as a depressant, stimulant, and hallucinogen.

What Is a Depressant?

A depressant is a chemical that lowers and calms functional and emotional functioning, such as anxiety and panic. Because prescription medications have the ability to be abused, they are classified as depressants. Alcohol, barbiturates, and Xanax are all examples of depressants.

Cannabis has a soothing impact on the muscles and nerves, making it an excellent relaxation aid. With time, tolerance to THC develops, so more of it is required to give the same results. If you utilize marijuana on a daily basis, you may become reliant on it.

Depressants are drugs that cause a feeling of calm. They may assist with anxiety and muscular tension, resulting in drowsiness.

When you consume alcohol, it slows down brain activity and has a calming effect on the central nervous system.

The depressant effects of marijuana include:

The adverse side effects of depressants include:

What Is a Stimulant?

A stimulant is a drug that energizes or stimulates you. It may boost your mood and attention. Stimulants include cocaine, Adderall, and methamphetamine. Stimulants are psychoactive medicines that can cause blood pressure and heart rate to rise. 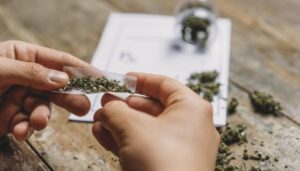 Cannabis has a calming effect, which causes drowsiness and a decreased heart rate. Cannabis is often considered a stimulant since it makes you feel more awake, active, and joyful, especially after consumption. Marijuana’s ability to improve moods might cause some individuals to become dependent on it.

Stimulants are chemicals that increase alertness and mood by stimulating the brain’s dopamine and norepinephrine receptors.

Stimulants, including marijuana, might also produce a euphoric or high sensation as a result of the dopamine-boosting properties of these substances.

Side effects of stimulants may include:

What Is a Hallucinogen?

Hallucinogens affect how neurons communicate with one other and the brain. Hallucinations are illusory views of reality. As a result, taking this medicine may lead to altered perceptions of reality, as well as visual, olfactory, auditory, tactile, and/or mental hallucinations. Hallucinogens include LSD and MDMA.

Hallucinogens are drugs that alter a person’s sense of reality. Because of their mood-elevating qualities, which are caused by increased levels of serotonin in the frontal cortex of the brain, which is responsible for emotion, perception, and thinking, they may have these side effects.

Marijuana may, therefore, cause someone to have heightened sensory perception, resulting in them:

Some people may find enhanced sensory perception to be a pleasurable form of hallucination.

Hallucinogens can also cause more intense symptoms that may be distressing. The possible adverse side effects of these drugs include:

Is Marijuana a Stimulant or Depressant?

Is cannabis a depressant or a stimulant? Marijuana’s placement in these categories isn’t as clear cut as you may believe. Effects can vary from one person to the next, and different strains have unique effects.

Hallucinogens create fraudulent perceptions of events, senses, and objects. Many people believe that cannabis causes hallucinatory effects, although this is not the case. Time distortion is a type of hallucination that can occur after marijuana use.

Cannabis is a complex drug that affects the brain in various ways. As a result, the appropriate response to “is cannabis a depressant or stimulant” is that it depends on the user and the strain. Some people feel calm and drowsy, while others are more lively and awake.

Marijuana is a complex substance with a wide range of effects. Depending on the sort of marijuana and the chemicals it interacts with in a person’s body, it may act as both an depressant and a stimulant at times. Marijuana does, however, have an impact on attention span, long-term memory storage, and psychomotor functions such as driving a car in general. Marijuana has been associated with the development of psychotic episodes in persons who are more sensitive to its impact and may cause irreversible damage to brain regions that control normal mental functioning. Because marijuana contains over 400 different chemicals, researchers are still searching for direct links between it and users. According to certain research, marijuana is a depressant rather than a stimulant, and users of cannabis are more prone to depression. While the long-term effects of marijuana use are being investigated, any intake of the drug has an impact on bodily natural conditions, which can always result in variations in normal function.

Another reason why marijuana’s effects aren’t predictable is that each user’s body reacts differently to the strain they consume. Each person has a unique natural level of neurotransmitters in their brain, and these chemicals are needed for mood control. Marijuana tends to disrupt the natural rhythm of these chemicals, making it impossible to determine how much and by how much they are changed.